Cancer has been the main focus of Gudas’ work over the past 20 years, and she and her lab continue to make strides alongside their newer projects. They have described the mechanisms by which retinoids initiate stem cell differentiation, shedding light on how changes in signaling can have vastly different outcomes in terms of how differentiated cells form. They have also developed mouse models of various cancers—head and neck and kidney—testing different retinoids on the tumors themselves.

Vitamin A enables some undeniably essential functions in the human body: the workings of the immune system, vision, and cell growth. In the early 1980s, researchers discovered that vitamin A and one of its metabolites, retinoic acid, also perform a critical function that could help treat cancers.

These studies piqued the interest of Lorraine J. Gudas, Pharmacology, Weill Cornell Medicine. The leukemia discovery was so remarkable because it shed new light on cancer. While people knew cancer was a disease of uncontrolled cell proliferation, the leukemia study made researchers appreciate that cancer cells often keep reproducing because they don’t receive the proper signals to differentiate.

“They’re stuck in that stem cell state and can’t differentiate to become a functional cell,” Gudas says. “We thought this was really fascinating and could lead to treatments for a number of diseases.”

Gudas has been probing the pharmacological potential of retinoids, the broader group of metabolites and derivatives of vitamin A, ever since. What she and her collaborators have found has illuminated the process of stem cell differentiation and opened new avenues for treating cancers. Recently, to Gudas’ surprise and delight, she and her team made breakthroughs in understanding retinoids’ seemingly critical role in diabetes.

Gudas’ newest area of research began when her lab used retinoic acid to induce the differentiation of embryonic stem cells into pancreatic endocrine cells. These are cells in the pancreas that produce insulin, the same cells that die in patients with diabetes.

If the body needs retinoic acid to make insulin-producing cells, what happens if the body doesn’t have enough retinoic acid? Is diabetes associated with vitamin A deficiency?

To test this idea Gudas and her lab put mice models on a vitamin A deficient diet. Within 10 weeks, the mice models manifested a type of advanced diabetes. “We showed that the vitamin A deficiency essentially led to the loss of cells that make insulin in the pancreas,” Gudas says. “No one had ever shown this before.”

Diabetes is on the rise in developing countries, where food and nutrients may be scarce. Gudas speculates that the diabetes in these countries may be due to a vitamin A deficiency. Gudas’ next question was about patients in the United States and other developed countries with obesity-associated diabetes, who would seem to have plenty of vitamin A in their diets.

Gudas’ team put mice models on a high fat diet that contained normal levels of vitamin A. The mice models as expected, developed obesity and diabetes. When they tested the blood of the models, they found normal levels of vitamin A. Then Gudas—along with former postdoctorate Steven Trasino, now assistant professor at Hunter College, and Weill Cornell Medicine faculty colleague Xiao-Han Tang, Pharmacology—tested the tissues.

“What we found, and this was a big shock to us, was that the obese, diabetic mice, despite having normal vitamin A levels in their diet and their blood, had very little vitamin A in their tissues, including the liver, lungs, kidneys, and pancreas,” Gudas says. “We guessed that just as in the non-obese mice, vitamin A deficiency in the tissues of the obese mice models was associated with damage to the pancreatic cells that make insulin.”

This vitamin A deficiency in the tissues is still a puzzle. “Is the vitamin A reaching the organs and then coming out quickly? Is it just not getting into the organs, getting stored somewhere else in the body, or being excreted?” Gudas asks. “This is something we need to understand, but we’re excited because we are certain this discovery has implications for human health.”

The next step will be understanding the mechanism by which localized vitamin A deprivation is occurring and to test whether the results in mice models match aspects of the disease in humans. The initial findings, however, constitute a breakthrough. In addition, Gudas notes, “Fatty liver disease, also on the rise in America and also associated with obesity, could be linked to vitamin A deficiency in the liver as well.” Further studies have indicated that this is true.

“Sometimes research can go on slowly for quite some time, and it’s not super-exciting every day,” Gudas says. “You just keep working, moving step by step. But when a result turns out to be unexpected, and then you can go on to make and prove your hypothesis, it’s very energizing.” 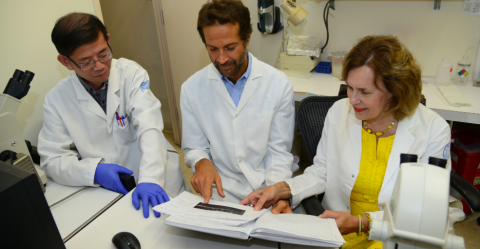